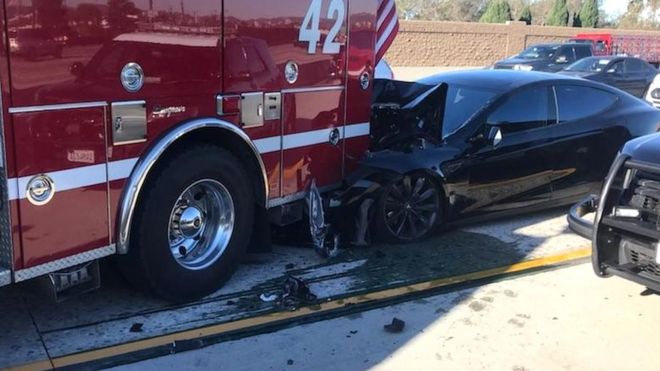 Two vehicles reportedly engaged in self-drive modes – a Tesla Model S and a General Motors Chevy Bolt – have been involved in separate road accidents in California.

Culver City’s fire service said the Tesla had “ploughed into the rear” of one of its fire engines parked at the scene of an accident on Monday. The car’s owner subsequently claimed it had been in Autopilot mode at the time. The GM incident resulted in a collision with a motorbike in San Francisco. The rider says the car – which was using GM’s Cruise Automation technology – caused him serious injury and is now suing GM, according to local newspaper The Mercury News. GM has alleged the motorcyclist was at fault. The event dates back to December, but has come to light only now. Car-makers suggest self-drive technologies should make the roads safer, but at present California requires a driver to remain behind the wheel so they can retake control at short notice. However, the state’s Department of Motor Vehicles is currently considering new regulations that would allow tests on public roads without a human sitting in the driver’s seat. The US National Transportation Board (NTSB) has said it will investigate the Tesla crash. According to a tweet by the Culver City Firefighters, the Model S was travelling at 65mph (105km/h) when the impact occurred. An official said:

Amazingly, there were no injuries.

Tesla has the ability to analyse data gathered by its vehicles’ on-board computers to determine the cause of crashes, and has shared information with the press about previous high-profile accidents. However, for now the car company has limited itself to saying that

Autopilot is intended for use only with a fully attentive driver

and that it has instructed drivers to keep their hands on the steering wheel while employing it. The NTSB previously investigated Tesla after a Model S crash in 2016 in which the driver died. It held the company partly accountable saying the Autopilot system had given the victim “leeway… to divert his attention to something other than driving”. Since the accident, Tesla has introduced an update that brings its cars to a halt if they detect a driver’s hands are not on the wheel.

The Chevy Bolt accident was on 7 December during the morning commute. The injured motorcyclist, Oscar Nilsson, is a commercial photographer who had previously worked with GM and other car brands on commercial projects. According to an accident report filed by GM, its vehicle had been changing lanes when the gap ahead closed. While the Chevy Bolt had been re-centring itself in the original lane, GM said, a Honda motorcycle travelling at a faster speed had moved into the car’s way, glanced off its side, wobbled and fallen over. A GM spokesman told the BBC:

Safety is our primary focus when it comes to developing and testing our self-driving technology.

“In this matter, the SFPD [San Francisco Police Department] collision report stated that the motorcyclist merged into our lane before it was safe to do so.” However, Mr Nilsson disputes this account and alleges the car “suddenly veered” into his lane. His lawyer has further alleged the Chevy’s back-up driver had tried to grab the wheel to prevent the accident but was too late to do so. “Why don’t these folks take some responsibility?” the lawyer told the Mercury News. Mr Nilsson claims he has suffered neck and shoulder injuries, adding he has had to take sick leave, and is claiming damages. Details of the legal dispute have emerged a week after GM published its annual self-driving safety report. It also announced that it hoped to deploy test vehicles with no steering wheel or pedals as soon as next year.