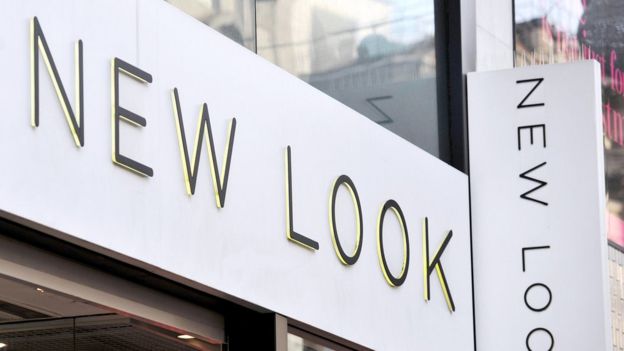 British fashion retailer New Look plans to close 60 stores as part of a rescue deal to help it avoid going into administration.

About 980 staff face redundancy – from a 15,300-strong UK workforce – and rents at about 400 stores will be slashed. The rescue plan still needs approval from creditors. New Look said it faced “a difficult trading environment”. Chairman Alistair McGeorge said the cuts were “tough but necessary”. The retailer – which has 593 stores in total – hopes to redeploy employees within the business where possible. The firm said it had been struggling with its rental costs and had asked landlords for leeway so it could “restore profitably”. It has also faced an “extremely challenging” retail market, driven by weaker consumer confidence, the implications of Brexit and competition from online channels,” said Deloitte, which is handling the firm’s Company Voluntary Agreement – a type of compromise deal that allows a firm to avoid going into administration.

New Look is an iconic brand on the High Street and the Company Voluntary Agreement will provide a stable platform upon which management’s turnaround plan can be delivered,

said Daniel Butters, a partner at Deloitte. “It is important to stress that no stores will close on day one, and employees, suppliers and business rates will continue to be paid on time and in full.”

A glut of UK retailers have made closures or gone bust in recent months amid a slowdown on the High Street. Last week toy store chain Toys r Us fell into administration, along with electronics retailer Maplin, leaving thousands of jobs at risk. Restaurant chains Byron and Prezzo have also announced closures, while House of Fraser is seeking to shore up its finances. On top of weaker consumer confidence, experts say retailers are battling a “perfect storm” of pressures including the rise of online shopping and rising overheads such as the National Living Wage. Many firms also over-expanded during the good years, leaving them dangerously indebted. New Look will learn if creditors have approved its rescue plan on 21 March. The British Property Federation said it would be up to individual landlords whether they accepted the proposal. It comes on the day the government launched its first industry-led Retail Sector Council to discuss the sector’s challenges. It will include major retailers such as Boots and Amazon and meet regularly with government to discuss “the changing demands of consumers”, retail minister Andrew Griffiths said.