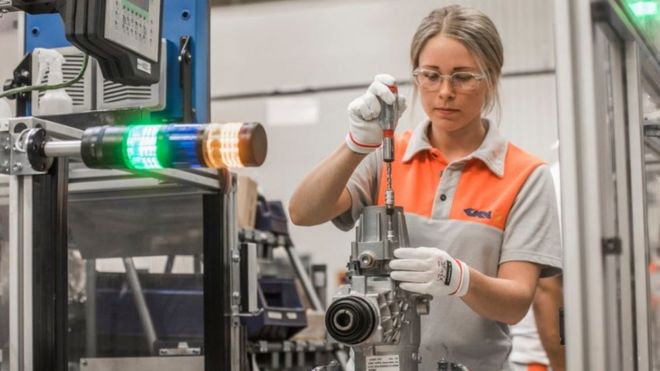 Turnaround specialist Melrose has increased its offer for UK engineering giant GKN from £7.4bn to £8.1bn.

GKN makes parts for Boeing 737 jets and Black Hawk helicopters, as well as parts for Volkswagen and Ford cars. It has fought hard against the bid, offering to give back £2.5bn to shareholders and agreed to merge its car unit with US company Dana. The takeover battle has also entered the political arena, with some MPs calling for the bid to be blocked.

GKN employs more than 59,000 people, 6,000 in the UK alone. It became a takeover target after it issued profit warnings late last year. Melrose said all recent attempts to engage in “constructive discussions” with GKN had been blocked. It added that its latest offer was “final” and would “not be increased under any circumstances”. It is now offering 467p a share, compared with Friday’s closing share price of 435p. Melrose is also offering to give shareholders £1.4bn in cash as part of its offer. It has also raised the amount GKN shareholders would own in Melrose following the deal from 57% to 60%. However, investors appeared unimpressed by the latest move. Shares were up less than 2% in early trading at 444p. Rebecca O’Keeffe, head of investment at Interactive Investor, said:

The muted market reaction… is the strongest indication yet that Melrose might not get its way.

“The robust efforts GKN has taken to protect itself from the hostile bid, including the proposed disposal of its Driveline business to Dana, combined with the comments from Melrose that their offer will ‘not be increased under any circumstances’ is leading investors to conclude that GKN has won this battle, at least for now.” GKN said it was evaluating the new bid and advised shareholders to take no action. It said it would provide a response in due course. Earlier on Monday, GKN had issued its latest defence. However, this was based on Melrose’s previous offer, which it said was “opportunistic” and “fundamentally undervalues” GKN’s prospects.

Melrose is a firm that specialises in buying up industrial companies it believes are undervalued and restructuring them before selling them on. The takeover approach has also raised fears among unions and MPs that GKN, one of the UK’s largest industrial firms, will be broken up and sold to overseas owners. The Pensions Regulator has warned that the Melrose takeover could affect the company’s ability to fund its pension scheme. Last week, a cross-party group of MPs wrote to the Business Secretary, Greg Clark, saying the Melrose takeover should be blocked. GKN shareholders have until 29 March to decide whether or not to accept Melrose’s offer.

Melrose called GKN’s attempts to fend off the approach a “hasty fire sale of GKN businesses before they have reached their potential”. In its offer statement, Melrose chairman Christopher Miller appealed to GKN’s shareholders. He said:

On the one hand you can join us on a journey of value creation by investing in a UK listed manufacturing powerhouse worth over £10bn today and receiving £1.4bn of cash. On the other hand your board is attempting a hasty fire sale of GKN businesses before they have been given a chance to reach their potential and with damaging consequences, we believe, for all stakeholders.

On Friday, GKN agreed to merge its Driveline division with US auto-engineer Dana in a deal worth $6.1bn (£4.4bn). The deal would see GKN shareholders end up with a 47.25% stake in the enlarged, US-listed group. However, Mr Miller said the proposed deal was likely to involve a “lengthy and uncertain completion process” with competition authorities, and added that some GKN investors would not be able to hold the shares as they would not be listed in the UK.