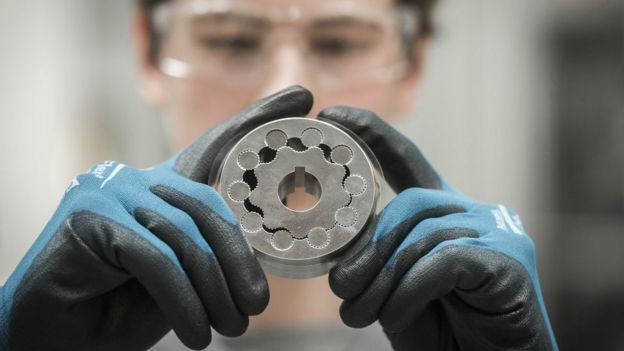 Business Secretary Greg Clark has written to Melrose demanding “binding” commitments from the turnaround specialist over its £8.1bn bid for GKN.

He sought “extensive and clear” measures over GKN’s workforce, research and development, and pension schemes. Mr Clark also raised concerns over national security given GKN’s role in supplying the UK armed forces. In response, Melrose set out a number of pledges, including not selling GKN’s aerospace division for five years. The turnaround specialist said that for five years it would maintain the company’s London listing, maintain its UK headquarters, and ensure research and development (R&D) spending was at least 2.2% of sales. If Melrose’s bid succeeded, Mr Clark told MPs that the Ministry of Defence would seek a “legally binding commitment relating to the management of any defence contracts”. He told the Commons he would await MoD advice before deciding whether to intervene in the deal on national security grounds.

GKN makes parts for planemakers Airbus and Boeing, as well as parts for Volkswagen and Ford cars. It is one of the UK’s largest industrial firms, employing more than 59,000 people globally – 6,000 of them in the UK. Melrose specialises in buying up industrial companies it believes are undervalued and restructuring them before selling them on. GKN shareholders have until midday on Thursday to accept the bid from Melrose, or back GKN’s own business plan. The plan includes combining GKN’s automotive unit with US group Dana, leaving GKN to concentrate on its aerospace business. In his letter to Melrose chief executive Simon Peckham, Mr Clark set out a series of commitments “which would need to be binding” if the company’s bid for GKN was successful. He said GKN should remain operating as a UK business, with its share listing and headquarters staying in the UK. GKN should also maintain its UK workforce and respect existing employment rights.In addition, Mr Clark sought commitments over investment in R&D, investment in workforce training, and arrangements for current and future pensioners. In the area of defence, the business secretary said he would expect “to see a commitment to continuity of ownership and strategic investment”. Also, Melrose should not quickly sell-on the business without the government’s consent.

Mr Clark said he was “mindful the business model which Melrose operates and its history of acquiring, improving and selling businesses”.

Whilst this approach can have an important and beneficial role to play, tensions could arise between this approach and the need for long-term investment and stability.

He said the public “reasonably” expects that companies which receive public money through contracts or R&D, should take a long-term view. In response, Mr Peckham said Melrose’s proposal was preferable to the “fire-sale being undertaken by the current GKN board”. He said Melrose had agreed a number of legally enforceable undertakings with the Takeover Panel to address the government’s concerns – including maintaining GKN’s UK base and its spending on R&D.

To demonstrate the strength of our commitment and ensure that its improvement and investment programme is not unduly interrupted, we are willing to make a legally binding commitment to you … that, subject to below, Melrose will not sell the aerospace division before 1 April 2023.

This would not prohibit it from floating the aerospace division on the UK stock market, Mr Peckham added. He also said that if it was approached by a “suitable strategic purchaser” before 1 April 2023, Melrose would seek government approval for the deal.