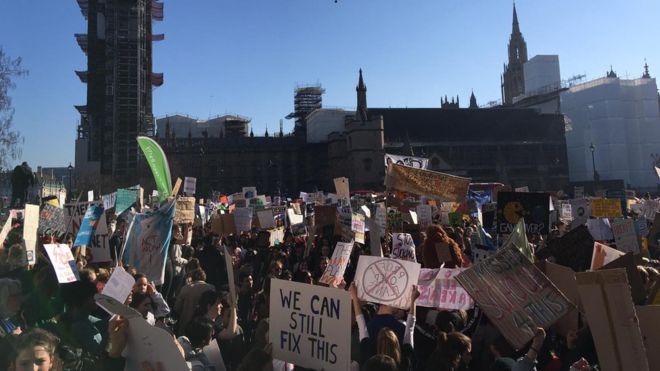 Schoolchildren across the UK have gone on strike as part of a global campaign calling for action over climate change.

Students around the country walked out of school to call on the government to declare a climate emergency and take active steps to tackle the problem.

“Save our planet” was the message chanted by thousands of people gathered in Parliament Square in London.

Organisers Youth Strike 4 Climate said protests were taking place in more than 60 towns and cities across the UK.

The action is part of a much wider global movement, known as Schools 4 Climate Action.

t began with 15-year-old Swede Greta Thunberg skipping class to sit outside government buildings in September, accusing her country of not following the Paris Climate Agreement.

Since then, tens of thousands of children across Belgium, Germany, Sweden, Switzerland and Australia have been inspired to hold their own demonstrations.

In London, 15-year-old Christina, from London, said the issue was too big to ignore.

“A lot of us are very good, obedient students but when it comes to climate change, it’s really important,” she says.

“The youth of our time tend to get pushed to one side. We often stay quiet but when it comes to climate change we are going to have to pay for the older generation’s mistakes.

“It really scares me.”

Part of the UK Student Climate Network, 15-year-old Scarlet, from Suffolk, says the group has a detailed list of demands.

“We want the UK government to declare a climate emergency and make moves to achieve climate justice, prioritising this above all else,” she told BBC News.

“We’re demanding the government listen to us and we will continue to make a noise until they do so.

“It can’t be about behaviour change any more; it has to be about system change.”