A number of projects to improve the south Chiswick area have received a major boost after it was announced they are to get almost £2 million from the Mayor’s Liveable Neighbourhoods programme.

The schemes set to benefit include the Grove Park Piazza project and the walkway to link Barnes Bridge with the Thames Path (The Barnes Bridge Walkway). Measures to improve local cycling links with the proposed Cycle Superhighway 9 along Chiswick High Road are also slated to get funding.

The Liveable Neighbourhoods funding, which has increased from £33 million in November 2017 to £53.4 this year, is used to improve local neighbourhoods in inner and outer London, with new walking and cycling infrastructure, new pedestrian crossings and rat runs closed to motor traffic. The money is provided to Hounslow Council to allocate to the approved projects.

The investment in Chiswick will go towards building the new pedestrian walkway under Barnes railway bridge. New cycle connections will be made between the Thames Path and the High Road. The Grove Park piazza will be redesigned, school streets introduced and low-traffic neighbourhoods developed in the residential areas south of the A4, according to a statement released this week (5 March).

The Barnes Bridge walkway is part of the overall regeneration plan for Dukes Meadows and would mean that pedestrians will no longer have to divert up Dan Mason Drive and The Promenade and away from the river while walking on the Thames Path. Hounslow Planning Committee approved the application for the proposed new footbridge in February 2018. The funding is unlikely to be sufficient to complete the project but will allow more detailed designs to be drawn up.

Kathleen Healy of the Dukes Meadows Trust said: “We are delighted that funding has been secured for the footbridge. The Trust commissioned the first feasibility by WS Atkins that proposed the bridge as a solution to connect the Thames Path and the clubs upstream of the bridge with the transport hub at Dukes Meadows.

“The creation of the recent master plan seemed a good opportunity to revive the idea and the Trust lobbied the council with Old Meadonians FC, Thames Tradesmen and Chiswick Rugby Club to have the bridge included in the plans. We congratulate the council on securing the funding for these schemes for Hounslow residents, in what would have been a competitive process.”

The idea behind the Grove Park Piazza is to link the Station House pub with the parade of shops and create a social focal point for local residents. The project which is spearheaded by the Grove Park Group (GPG) became a Mayor of London Community Project with a crowdfunding page on SpaceHive which raised £77,000.

The Grove Park Group Residents Association said it was, “very pleased to announce that the Grove Park shops Piazza design is to go ahead. Hounslow Council’s share of the funding has been provided by the Mayor of London’s Liveable Neighbourhoods programme. Last year the firm Steer Davies Gleave were appointed to provide the design for the Piazza and now we are in a position to get them started on the work. Again big thanks to all the patient backers of the project who have been waiting for this news. We will now work closely with the designers to ensure your vision for the Piazza is observed. As the design comes together we will hold an event at the shops to share progress and get your feedback.”

The group says that the area around the shops has been long overdue regeneration as the pavement is narrow, sloping and provides poor accessibility. Block paving the entire area and introducing traffic calming features will significantly improve pedestrian safety. The area outside the cafe would be widened and more tables could be added, creating a focal point. 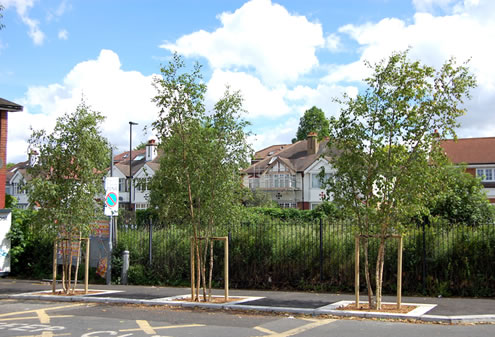 Councillor Hanif Khan, Cabinet Member for Transport at Hounslow Council, said: “This Liveable Neighbourhoods funding award is fantastic news for Hounslow. The Thames Path is a wonderful amenity for residents and visitors alike, and this funding will improve everyone’s access to it. The funding will also allow us to explore better links to the proposed cycle improvements along Chiswick High Road, and hopefully give people real options with regard to using their cars less. These improvements to our walking and cycling infrastructure will turn our localities into safer, greener and healthier places for our local residents to live in.”