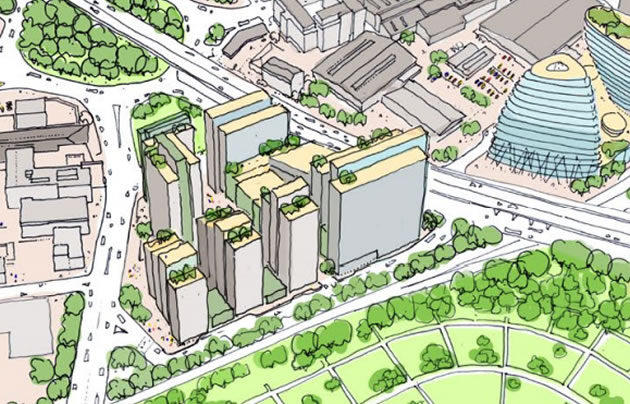 Plans for the proposed development of the B&Q store site near Chiswick Roundabout are to be revealed at a series of public consultation events later this month.

The developers Reef Group, working with architects Benoy, presented a series of outline plans for ‘Hudson Square’ back in July 2017 and the new designs will be based on feedback from the initial consultation.

Initially the B&Q development, which will be called Hudson Square, was to contain two blocks of student housing, a hotel, boutique cinema, car showcase as well as retail and assorted residential including an affordable block of flats. References to student housing, the cinema and affordable flats have not appeared in the details released so far by the developer but they appear to have put an extra emphasis on the automotive industry element, promising it will be “London’s hub for automotive technology.”

They say in a letter sent out to some local residents and councillors, “Our proposal will deliver the world’s first fully integrated customer-centric car showcase, exhibition, gaming and technology experience. At the heart of the scheme will be a new public square surrounded by restaurants, retail, a hotel and residential units. It is envisaged that the scheme will become London’s hub for automotive technology generating high-value employment that will revitalise this strategically important location.” 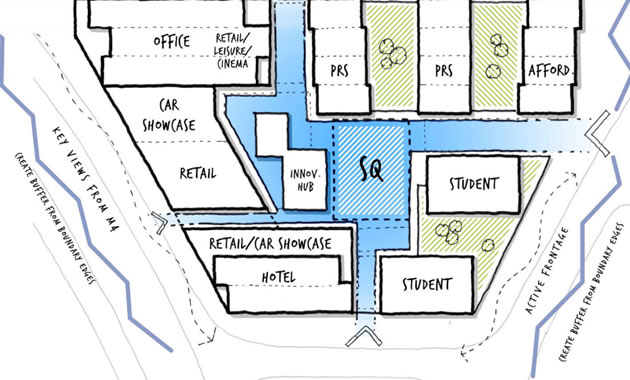 The drawings for the outline design (above) initially howed at least six tower blocks in a mixed use development. No indication was given by the developer as to the likely height of these towers but the drawings suggested that some of them will be as tall or taller than a project at Capital Interchange Way which was being planned at the time. This is also pictured in the drawings and the maximum height there is 22 storeys.

Local people who attended the exhibition last year raised the issue of air pollution as the site is at the junction of several busy roads, as well as the extra pressure on infrastructure, including public transport. Gunnersbury station would be the nearest underground station to the site and there are already concerns about it operating at over capacity. Reef Estates said at that time that there is a demand for student accommodation in the area, and they believe the location would suit those at University of West London (based in Ealing and Brentford).

Located to the north of Chiswick Roundabout, the site is bordered by the Great West Road, Larch Drive, the North Circular Road and Gunnersbury Park to the north. It is approximately 1.6 hectares in size. It was once home to the Hudson Motor Company and played a key role in the industrial formation of the Great West Road, with purpose built premises for the company established on the site in 1926.