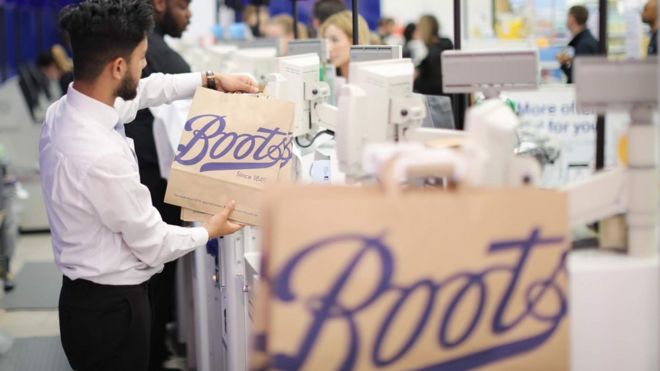 Health and beauty chain Boots has started to replace plastic bags with brown paper bags in an attempt to cut down on the use of single-use plastic. The retailer is also introducing bleached paper dispensing bags for prescriptions.

However, prescriptions assembled at its central pharmacy will still be sent out in plastic packaging, a practice that has been criticised by customers. Boots says these bags need to be durable and the plastic is recyclable. The new paper bags will initially be available in 53 of its 2,485 stores, with all of Boots’ outlets using paper by early 2020. The bags will cost 5p, 7p and 10p – the current plastic ones come in two 5p and 10p sizes – and, as is the case now, profits from the bags will go to BBC Children in Need.

The paper bags in England are not subject to the carrier bag levy, but they will be in Scotland, Wales and Northern Ireland.

Boots UK signed up to the UK Plastics Pact last year and said at the time it was “committed to reducing single-use plastic”. It said it had been looking for ways to change its use of plastic before last month’s stories about the use of plastic by its centralised pharmacy – which can handle services such as repeat prescriptions.

‘Better for the environment’

For these central facilities, it is looking at alternative packaging, such as using potato starch or a paper alternative, but in the meantime the centralised pharmacy will move to a minimum of 60% recyclable content plastic from July.

There is a debate about the impact of replacing plastic with paper. While paper bags require marginally fewer reuses than bags for life to make them more environmentally friendly than single-use plastic bags, they are less durable than other type of bags.

Greenpeace’s senior oceans campaigner Louise Edge said: “If our oceans had a doctor, what they would order is a drastic cut in the amount of single-use plastic in circulation. So it’s great to see a major High Street brand like Boots listening to public concerns and ditching plastic bags.

“But retailers need to be careful that by swapping plastic for paper they don’t end up shifting the problem from our oceans to our forests. This is why as well as looking for new materials for their carrier bags, High Street chains should also encourage their customers to bring their own reusable bags and truly tackle the throwaway culture that’s damaging our living world.”

Helen Normoyle, director of marketing at Boots UK, said the paper bags “have been carefully tested to make sure that over their entire life cycle they are better for the environment, whilst still being a sturdy, practical option for customers who haven’t bought their own bags with them when shopping”. 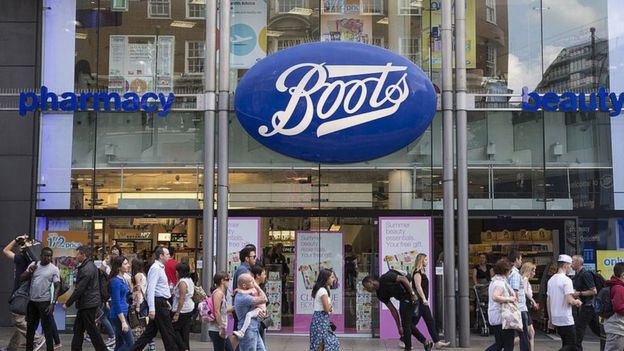 “We have seen a significant shift in our customers’ attitudes towards plastics and recycling in recent years – there’s never been a more important time to show our customers that we’re taking action to reduce our impact,” she added.

The change to paper bags – which are made from recycled brown paper and printed with water-based inks – is intended to remove 900 tonnes of plastic from Boots’ store operations each year. Its website shows that in the 1870s – when it started it out – products were sold in paper and wrapped in string. Other retailers, such as Morrisons, have introduced paper bags, while Waitrose is piloting a scheme where customers use their own containers.

Boots is owned by US company Walgreens Boots Alliance, which warned in April it was considering store closures to save costs. The move comes after the chain said it had suffered its “most difficult quarter” since the firm’s formation, with UK like-for-like sales down 2.3%.