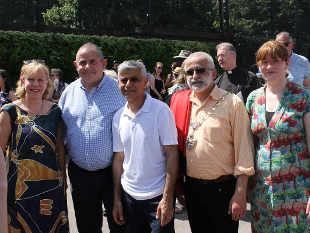 Despite soaring temperatures, the excitement was palpable last Saturday (29 June 2019) as families, teachers, clergy and public figures gathered at St Mary’s Catholic School in Chiswick to welcome the Mayor of London, Sadiq Khan who visiting the school to unveil a 400 foot ‘green wall’ installed in the playground to counteract the air pollution which children were being exposed to from the A4 dual carriageway, just three feet away.

In 2017 it was revealed that St Mary’s R C Primary School was among the 50 most polluted schools in London because of its proximity to the 6-lanes A4 with an average flow of around 100,000 vehicles a day.

Last year the headteacher had been forced to reduce outdoor playtime to protect the children’s health. In September 2018 a parent from the School, Andrea Carnevali, worried that his 6-year-old son and other children were exposed to some of the most toxic air in Europe, started the ‘Chiswick Oasis’ project, with the aim to create cleaner, greener air in the school.

The initiative received £32,000 in funding from the London Mayor’s ‘Crowdfund for London’ programme as well as other donations from public, local communities, small and large businesses alike eventually raising around £100,000.

The Mayor of London mixed with the crowd for more than 2 hours as he learnt about the several achievements of the Oasis project while the children took charge of entertainment with singing and music performances. Food and refreshments were provided by the PTA.

He then officially opened the 126-meter wall – the largest ever installed at a school in the UK – made up of 12,000 plants. The aim is that this will help to block and absorb harmful pollutants from reaching the school children as they play.

However, the Chiswick Oasis Project doesn’t stop here. Andrea Carnevali has been pushing on all fronts to turn the school from one of the most polluted, to one of the greenest in London.

He introduced ‘Car Free Fridays’ for parents and staff each week and then convinced local businesses to contribute prizes for monthly raffle draws to win vouchers, free meals, massages and similar to incentivise parents who choose to go to school by any other means rather than by car.

“I am overwhelmed with the level of support we’ve received. It has been amazing to see so many people and organisations in Chiswick and beyond rally behind this. Clearly people are now seeing this as a real problem and they are willing to help as much as they can.”

After reviewing the green wall, the Mayor of London was shown a brand-new air purifying unit which has been installed inside the Reception class, the classroom closest to the road. The unit was funded by Hounslow Council, keen to monitor its effectiveness on the reduction of particulate matter. If the results are positive, they will look at ways to help match-funding other units to place in the other classrooms.

The tour around the ‘Clean Air’ initiative ended with the unveiling of a plaque with hundreds of names of supporters of the Chiswick Oasis.