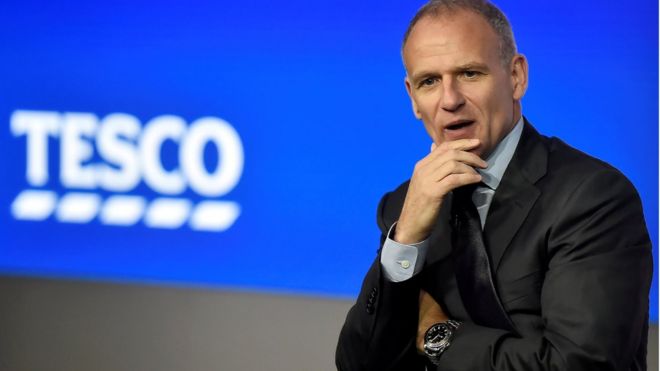 Tesco’s chief executive Dave Lewis is to leave next year after leading a turnaround plan for Britain’s biggest supermarket chain. In move that surprised analysts, Mr Lewis – who took the helm in 2011 – said the decision was “personal”.

Ken Murphy, who has held senior positions at the owner of chemist chain Boots, will replace him.

The departure was announced as Tesco reported a 6.7% rise in first-half profits to £494m. Tesco chairman John Allan said he had accepted Mr Lewis’ resignation with “regret” and said the chief executive intended to leave “in the summer of 2020”.

Mr Lewis said: “I believe the tenure of a chief executive should be a finite one and that now is the right time to pass the baton. The turnaround is complete, we have delivered all the metrics we set ourselves.”

The 54-year-old added: “I am going to take some proper time out, recharge the batteries and think about what comes next.” Analysts at Shore Capital said he was “the bloke that saved Tesco”. He took the helm at a tumultuous time for the supermarket group, announcing shortly after he took over in 2014 that the retailer had been overstating its profits.

The company subsequently revealed a loss of £6.4bn, the biggest-ever suffered by a UK retailer. Since then Mr Lewis has set about reducing costs, with the latest of round job cuts announced in August when it said 4,500 staff in 153 Tesco Metro stores would lose their roles. He also took on the discounters Aldi and Lidl by opening Jacks, Tesco’s own discount chain.

Bernstein analyst Bruno Monteyne told BBC Radio 4’s Today programme that there had been speculation about Mr Lewis’ future after that deal as Booker’s chief executive Charles Wilson had joined at the time.

“We’re all trying to grapple exactly about the timing right now,” said Mr Monteyne. His departure now was “a total surprise”, he said.

“Not only had it lost the trust of the customers, losing material market to the discounters, it ended up with an accounting fraud… internal morale broken. He really took over a broken company, and from being the most profitable retailer in Europe, suddenly had losses for the first time ever.”