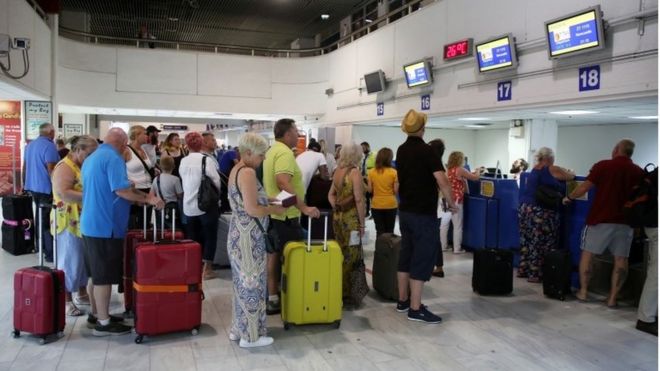 Thomas Cook customers who had booked holidays with the collapsed travel firm can now claim for a refund online. About 800,000 people had been due to take trips with the firm in the coming months, according to the Civil Aviation Authority (CAA), which is handling the refund process.

It will take 60 days for people to get their money back, the CAA said. The announcement came as the final flight bringing holidaymakers back by emergency repatriation was due to land.

The few remaining passengers who did not return on a CAA-organised flight will have to make their own plans, although those covered by the Air Travel Organiser’s Licence scheme (Atol) will be refunded.

CAA chair Dame Deirdre Hutton said she was “deeply relieved” that “Operation Matterhorn”, the two-week operation to return 150,000 passengers to the UK after the package tour company collapsed last month, was over.

“Staff worked like Trojans 24 hours a day to help everyone, but that was only task one, now it’s task two,” she said, referring to the refund process.

The CAA said the online refund system had been developed due to the large numbers of people affected by the firm’s collapse. In total, the aviation regulator has to refund 360,000 customers, three times larger than any previous refund programme.

People will have to wait up to 60 days for a refund, the CAA said. But those who paid by direct debit will get their money back by 14 October. In total, 100,000 Thomas Cook customers paid for their future holiday by direct debit, of which around a quarter of repayments were already in process, the CAA said.

Meanwhile, staff of the collapsed firm have not been paid for September and have to apply for their salary and redundancy related payments to the Insolvency Service’s Redundancy Payment Service (RPS).

About 9,000 staff in the UK were left jobless when the business failed to secure a last-ditch rescue deal.

The travel firm collapsed in the early hours of 23 September, after failing to obtain rescue funds from its banks. An inquiry has been launched by the Business, Energy and Industrial Strategy Committee, with MPs focussing on the directors’ stewardship of the company.

The Financial Reporting Council, the accounting watchdog, will also investigate the auditing of the company.